Working for a brighter tomorrow, with more rainbows for all, in front-end development, Drupal and beyond.

Lighting our torches in this universe 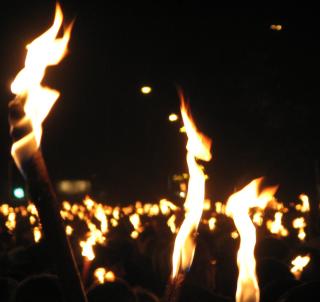 Note: I selected this image before these torches took on a much different meaning. I am leaving this image in place because we truly cannot know where the future will lead from where we are in a moment. All we can do is do our best to keep working towards a brighter future. I still stand by the message in this post and believe in its message today, almost exactly five years later, on the evening of January 16, 2022.
—Heather

My four-year old kiddo saw the moon outside Thursday morning, and she told me about how the moon goes around the Earth, and how the planets go around the sun, because we've been talking about that. Then she said that the sun doesn't move, and I replied, not quite.

She said woooooow, and then I told her that there are lots and lots of galaxies in the universe. She asked how many, and I said I thought around 200 billion. (It's actually 2 trillion.) She replied, "That's more than ten." I told her yes, that's a lot more than ten.

Then she asked me a very smart question, "Are there lots of universes?" I said we don't know for sure, but some people think so, and maybe one day we'll find out.

She said she calls all the planets and stars and galaxies space. I then told her we were going to visit Kennedy Space Center soon to see where rockets go into space. She was excited. She has said she wants to fly a spaceship someday, and maybe she will.

I keep thinking back to those multiple universes. I used to read a lot about cosmology and astrophysics, and certainly one theory out there is that each time one thing or another could happen, in fact both happen, in two newly split universes. Maybe this is true, maybe not. Quantum physics is quite literally Strange at times, so maybe so.

If so, there may well be a universe out there where this Friday, January, 2017, is very different from the Friday in our universe. There may well be a universe where Hillary Clinton is being inaugurated. I deeply wish I could be there to see that, to show my daughter what's possible, that we can choose to believe in lifting each other up, by including everyone and lifting all boats.

I almost think that universe must exist, and that somehow so many of us can feel that universe just beyond our fingertips. The fact we can't reach it may well be why we feel this existential dread, this sense that so much is not right with this world.

There is no way for me to fathom how some might believe that universe would be equally as bad as this one, much less worse than this one, given everything we now know.

We can't reach that universe of course. We can't see it. We can't know. But if there are branching universes, then it's important to remember that all of our decisions, our actions, our words matter. Our future isn't set in stone, it's not frozen, it's not destiny.

On our own, maybe we can only nudge the universe a little bit. Together, though, standing strong, we can make a difference. Atom by atom, molecule by molecule, we can choose a universe where we respect and care for each other, where nobody is left behind. Others may be working towards a different outcome, but there are more of us. Way more. If we do not give into despair, if we radically believe in hope, then yes we can. We can create a better universe for all.

It's pretty dark right now. I feel numb, and down, and frozen. So maybe I'm telling myself this even though I'm not sure I believe it. But if you believe it, and you light a torch, and you, and you, and you, then maybe we can all find our way out of this cave together, hand in hand.

Get your torches ready. Fired up?

Note: Again, to be totally clear, looking at this now from January 16, 2022, how about we grab some other forms of lighting rather than torches? Thank youuuuuuu.
—Heather