Working for a brighter tomorrow, with more rainbows for all, in front-end development, Drupal and beyond. 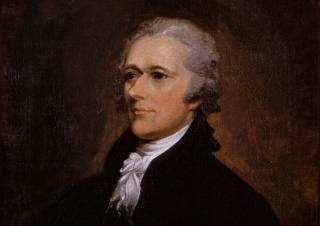 In the darkness of 2016, the brightest light for me and many others has been Lin-Manuel Miranda's broadway hit, Hamilton. A multitude of musical styes mix with a compelling look at our nation's founding through the eyes of immigrant extraordinaire Alexander Hamilton. A diverse cast infuses a familiar story with a new look that shows how all of the threads of America's great tapestry are welcomed and valued and how yes, immigrants get the job done.

This story of empowerment has comforted so many of us as the world has seemed to spin out of control. Yes, Alexander Hamilton is flawed, arrogant, and makes mistakes. We all do. Yet he still managed to pioneer much of what made America great. I find inspiration in knowing that great deeds can be accomplished despite our imperfections.

In the wake of Election Day, many of us have felt like we are in too deep, that it's easier to just swim down. We are learning to live with the unimaginable. And amidst this pain, Vice President-Elect Mike Pence walked into the Richard Rogers theater to watch a performance of Hamilton. And yes, the crowd began to boo.

Here walked a man who represented the antithesis of Hamilton's celebration of inclusion. As America has begun to open its arms to the LBGTQ community, Pence has clenched his fists. His support for "religious freedom" looks an awful lot like turning people away from lunch counters. Pence led the charge against Planned Parenthood, signed a law requiring burials for miscarriages, and his fixation on preventing women from making their own health care choices led to an outbreak of HIV in the state he governed. If this wasn't enough, Pence supported gay conversion therapy—literally trying to electrocute people out of being gay.

Since the election, Pence has headed up the Trump transition team. What sort of announcements have we seen for appointments from the incoming administration? First out the gate, Steve Bannon as chief policy advisor, who pretty much everyone agrees is an anti-semitic white nationalist. Michael Flynn, noted Islamophobe, as national security advisor. Jeff Sessions, who was considered by Republicans to be too racist to be appointed as a judge, as attorney general—do you think he will defend our civil liberties? I think not. Mike Pompeo, who wants to drastically increase domestic surveillance, as CIA director. The new administration speaks of registering Muslims, citing Japanese internment camps as legal precedent, as well as immediately deporting 3 million immigrants.

All this after a campaign that revolved around attacking immigration and minorities while indulging in misogyny. Since the election, the country has erupted with hundreds of incidents of hate speech, swastikas spreading like wildfire.

Mike Pence represents a campaign and administration that has increasingly revolved around white nationalism and exclusion. So nobody should be surprised that when he showed up at a play that celebrates an America that may be flawed, but offers the possibility of a more inclusive story, that the crowd began to boo.

After a raucous performance, the cast made a statement to Pence:

"You know, we have a guest in the audience this evening. Vice President-elect Pence, I see you walking out but I hope you hear just a few more moments. There's nothing to boo, ladies and gentlemen. There's nothing to boo. We're all here sharing a story of love. We have a message for you, sir. We hope that you will hear us out.

"And I encourage everybody to pull out your phones and tweet and post, because this message needs to be spread far and wide, OK?

"Vice President-elect Pence, we welcome you and we truly thank you for joining us here at Hamilton: An American Musical. We really do.

"We sir, we, are the diverse America who are alarmed and anxious that your new administration will not protect us — our planet, our children, our parents — or defend us and uphold our inalienable rights, sir. But we truly hope that this show has inspired you to uphold our American values and to work on behalf of all of us. All of us.

"Again, we truly thank you for sharing this show, this wonderful American story told by a diverse group of men and women of different colors, creeds, and orientations."

This isn't harassment of our next Vice President. It's a wake-up call.

I haven't had to feel the fear as directly, as personally, as so many have since Election, but I have not slept much. I very much worry about what will happen next to my neighbors, to my friends, to our democracy, to the progress we have fought for, and which now seems at risk.

And yes, Trump tweeted about this event, ironically asking that the theater be a safe space for all, and decrying criticism of him and Pence. This too is disturbing as attacks on the press continue, as protests are condemned, as we wonder at the possibility of a future where the first amendment no longer offers the same protections as it does today. And so far, Trump hasn't offered a word of condemnation on Twitter for the hate crimes committed in his name.

To me, this matters. Inclusion matters. Freedom matters.

Yet others have wondered if all of this is a distraction. Trump has agreed to a $25 million settlement of the Trump University fraud case. There are reports that post-election, he has gathered foreign diplomats in Trump hotels, potentially using the power of his office to enrich himself. Trump has brought his family members into the transition process, making a mockery of his claims that the Trump administration would operate separately from his business interests. Requesting top secret security clearances for family members is nepotism, not a normal transition process. His daughter Ivanka sat in on a meeting with Trump and Japanese foreign minister Abe in Trump Tower. This looks an awful lot like Trump will be personally benefiting from his pending political power, which is barred by the Constitution in Article I, Section 9, Clause 8. Perhaps Trump should have taken up Khizr Khan on his offer to lend Trump his pocket copy of the Constitution.

So is talking about Hamilton and booing a distraction from the "real" problems of potential corruption? Was Pence intentionally sent to Hamilton to divert attention, to stir up a scene, to allow Trump to change the conversation away from criminal charges? Maybe, but I think deeming Hamilton a distraction dismisses equally important issues at stake.

We are going to need to learn how to talk about both.

The story of the hour is whether America will be inclusive of all or warped into something else by white nationalists. The tale of the times is also whether our democracy will descend into a kleptocracy designed primarily for the benefit of the Con Man in Chief.

There's a lot to be upset about right now, a lot to fear. Different individuals are going to have different beefs with the incoming administration. If we fight amongst ourselves about what matters most, we lose. We need to build a coalition of all those disaffected, all those who dream we can be stronger together, all those who want integrity, freedom, and economic equality.

Raise your voices at what upsets you. Focus on that more than glaring at your potential allies.

If we want to rise up, we cannot throw away our shot.